Duhallow Students Winning for Nature at the Young Scientist!! 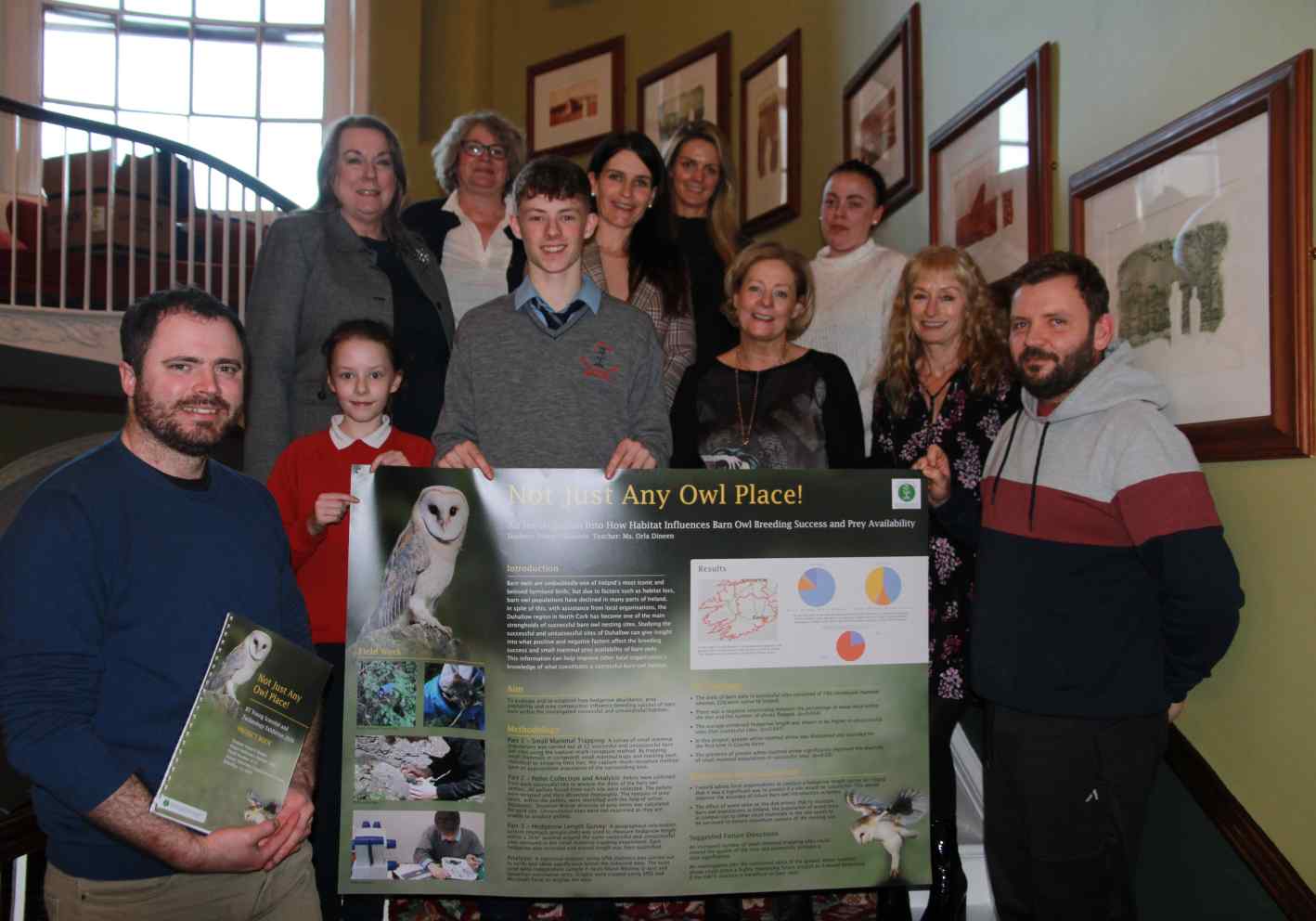 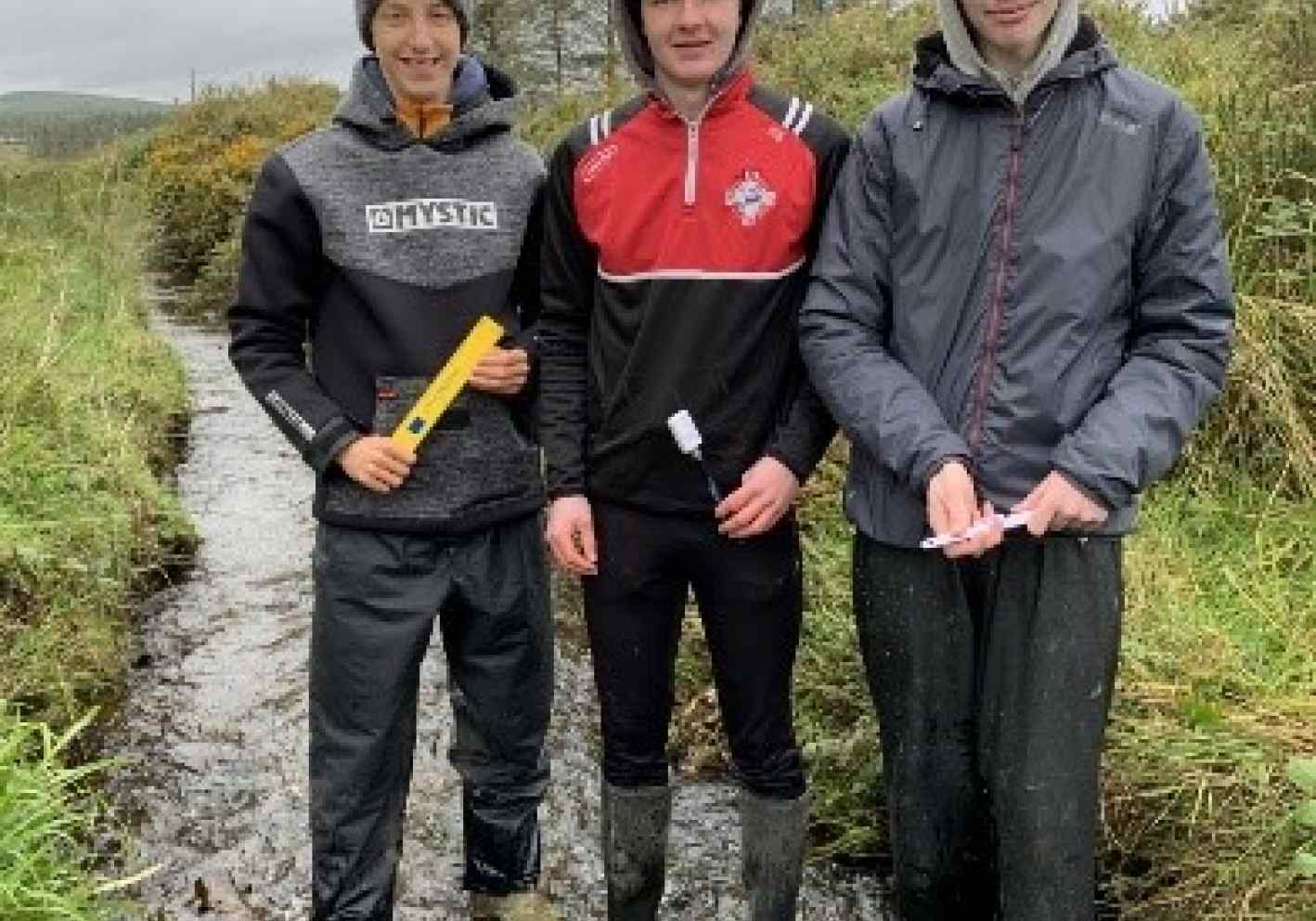 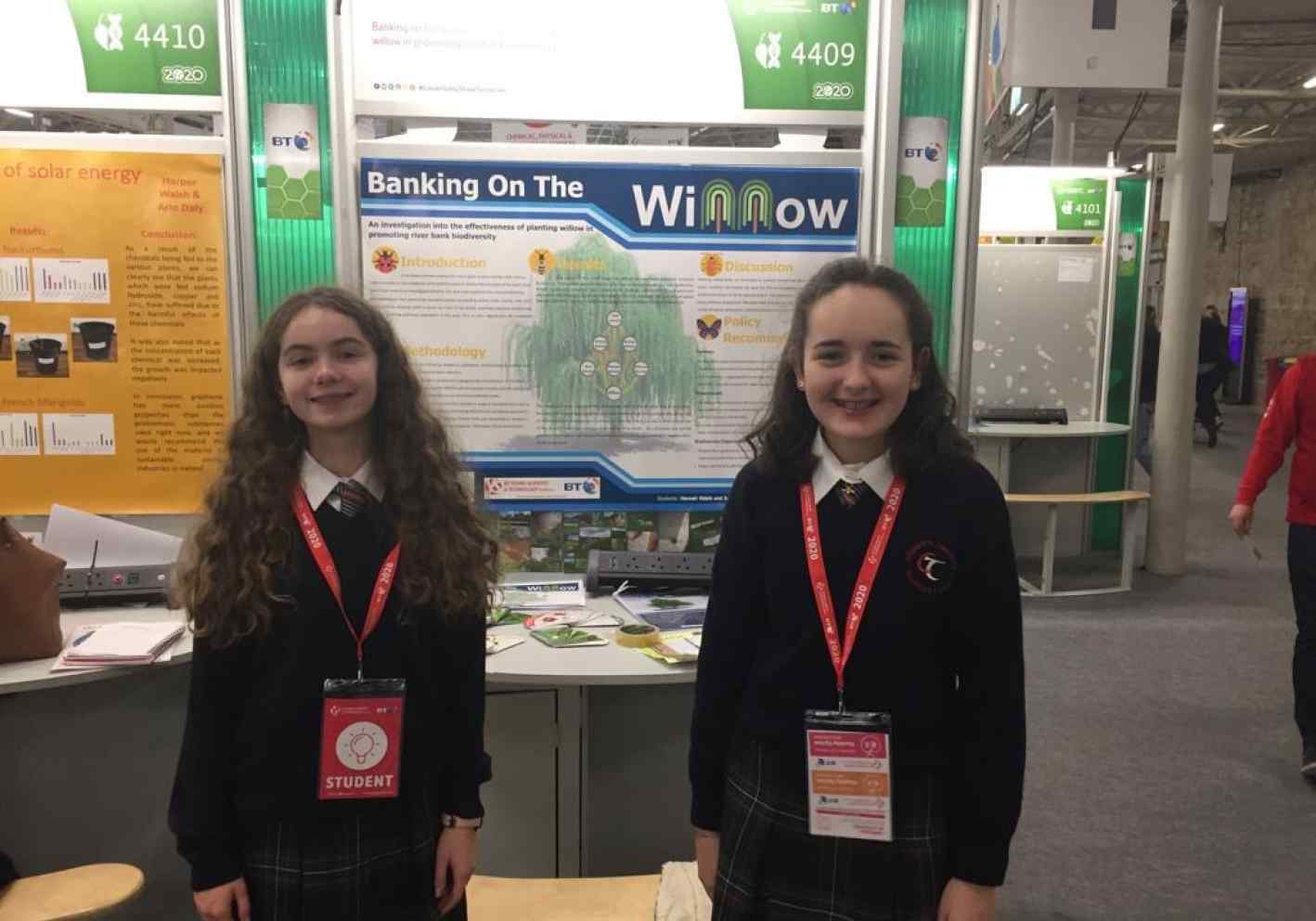 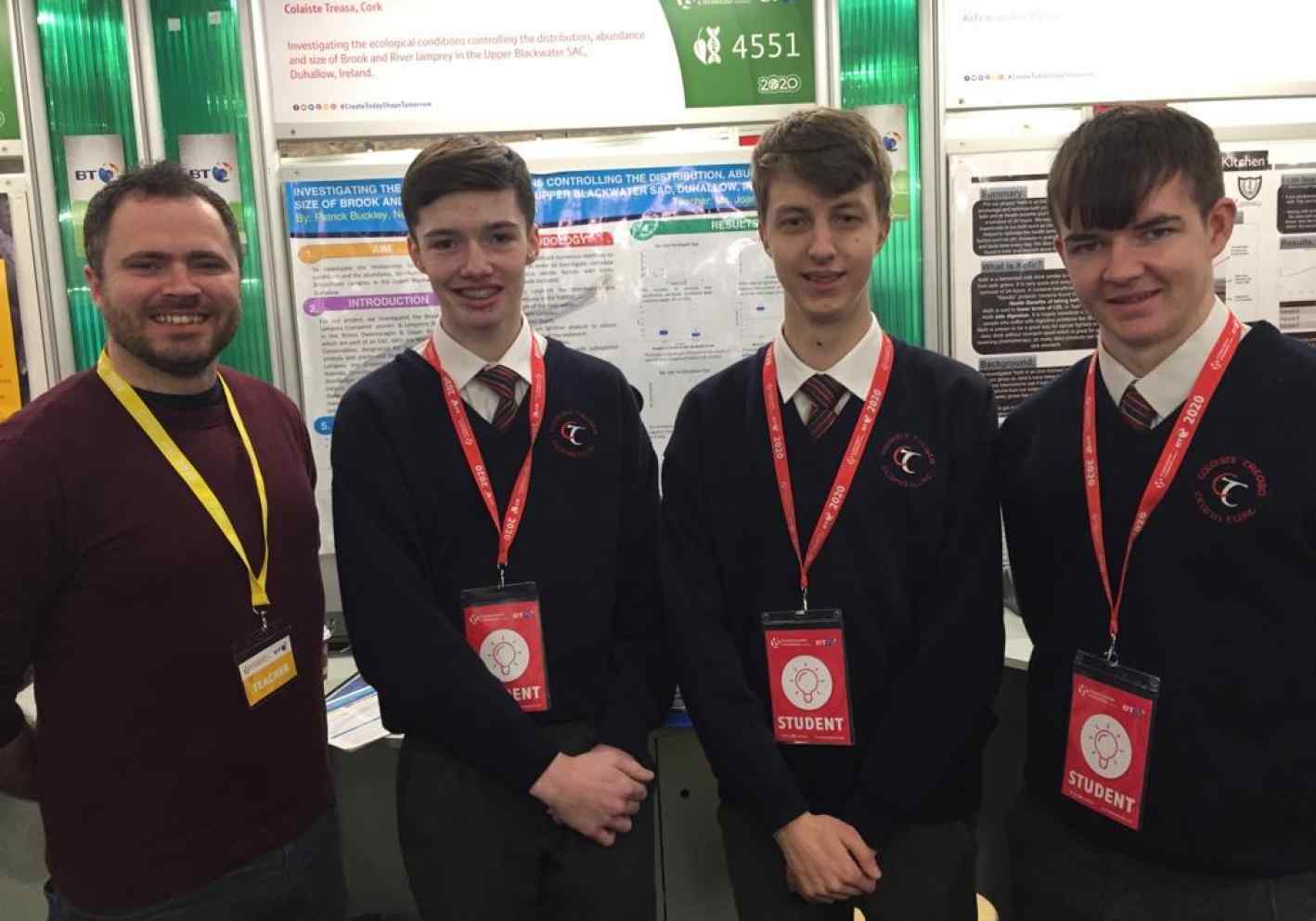 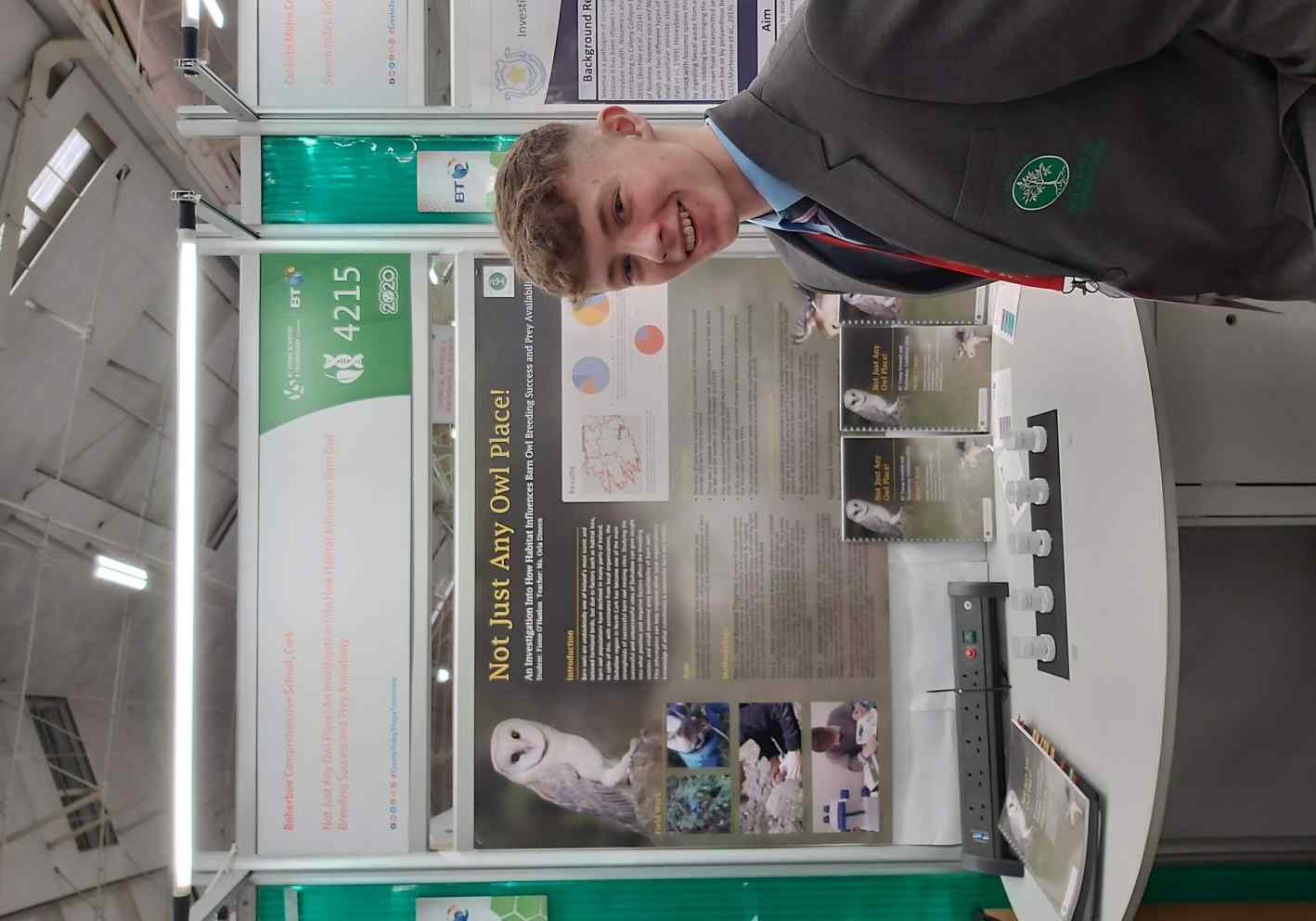 IRD Duhallow extends warmest congratulations to all the Duhallow Schools on their phenomenal success at this year’s BT Young Scientist Competition.

In 2019 youth activism for the environment made global news as students campaigned for policy makers to listen to the scientists on matters relating to climate change, biodiversity loss and sustainable food production. While young activists and advocates were taking a stand, young scientists throughout the country were advancing scientific knowledge on these matters. Earlier this month, at the 56th BT Young Scientist competition, held at the RDS, over two thirds (335 out 550) of the entries were projects related to climate change and the environment.
This enthusiasm for contributing to scientific research on the environment was extraordinarily evident in the students of Duhallow. Three such projects were undertaken under the mentorship of the staff of IRD Duhallow and each brought home an award in their category! The projects undertaken by the students were in collaboration with the RaptorLIFE and Duhallow Farming for Blue Dot Catchments programmes, and focussed on issues of interest to river management and biodiversity conservation in Duhallow.

Not Just Any Owl Place - Fionn O’Hanlon, Boherbue Comprehensive
First Prize, Biological & Ecological Intermediate Category and Rev Dr Tom Burke Bursary for Science Communication.
Fionn investigated how habitat conditions and diet influence barn owl breeding success. Duhallow is known to be a stronghold for the barn owl, one of our most iconic birds of prey. IRD Duhallow and Duhallow Birdwatch Group have installed and monitored the success of barn owl nest boxes throughout Duhallow for a number of years. Under the mentorship of RaptorLIFE, Fionn visited nest box locations and surveyed surrounding hedgerows and small mammal populations. He correlated this information with data collected on the number of chicks fledged from each site. His surveys indicated that prey species such as wood mice and bank voles were more abundant at sites where the barn owls had successfully bred. By analysing the remains of over 250 food pellets left behind by the chicks he showed that barn owls preferentially feed non-native species such as greater white toothed shrew and bank vole to their young. Identifying the prey by their skeletal remains, Fionn showed for the first time that the greater white toothed shrew, has spread as far west as the Cork/Kerry border. This is important because the greater white-toothed shrew is a relatively recent introduction to Ireland and is spreading rapidly. Over the four days of the competition the judges were so impressed by Fionn’s ability to communicate his research to a wide audience that they also awarded him the Rev Dr Tom Burke Bursary for Science Communication.

Banking on the Willow - Hannah Walsh & Johannah Pigott, Coláiste Treasa, Kanturk
First Prize, Biological & Ecological Junior Group Category.
Hannah & Johannah undertook a detailed study of the added biodiversity benefits of riparian restoration. Working on farms in the catchments of the Allow, Dalua, Owentaraglin and Upper Blackwater the students investigated how riparian restoration works undertaken by IRD Duhallow to prevent erosion have also had added benefits for native biodiversity. As part of SAMOK and RaptorLIFE livestock were excluded from rivers by erecting fencing and eroding banks were re-stabilised by planting locally sourced willows. Hannah and Johannah surveyed vegetation, pollinators such as butterflies and bumblebees, and other insect groups associated with willows that were planted between one and ten years ago. By comparing these to farms that had not undertaken riparian restoration the girls were able to show that there was a positive relationship between native biodiversity and willow age. They found that native plant communities recover over time once over grazing and erosion are prevented. They also showed that pollinator diversity and abundance was positively linked to native flora diversity, highlighting the importance of riparian restoration for the conservation of butterflies and bees. As part of their work the girls produced a leaflet educating others about making recommendations on riparian management

Investigating the Ecological Conditions Controlling Lamprey Populations in the Blackwater SAC - Nojus Perminas, Noah Walsh & Patrick Buckley, Coláiste Treasa, Kanturk.
Third Prize, Biological & Ecological Intermediate Group Category.
Nojus, Noah & Patrick investigated aspects of the ecology of the elusive lamprey species of Duhallow. These little known species of fish are protected under the EU Habitats Directive and the Blackwater is designated for their conservation. The investigation conducted by the boys proved to be rather novel as Brook Lamprey and River Lamprey are not extensively studied in Ireland. The students assisted RaptorLIFE ecologists with an electrofishing survey of lamprey. The students then conducted extensive environmental monitoring of river conditions in order to determine what the optimal conditions for the species were. The boys showed that elevation and sediment depth were the most important factors determining the abundance of lamprey. A difference in the maximum elevation at which the species were recorded in the Upper Blackwater and Owentaraglin suggested that barriers to fish migration like weirs and bridge aprons may limit the upstream movement of lamprey in the Blackwater. The students also showed that pH was positively correlated with the average size of lamprey in the population. The work conducted by Noah, Patrick & Nojus has important implications for how we manage our river systems for the conservation of biodiversity.