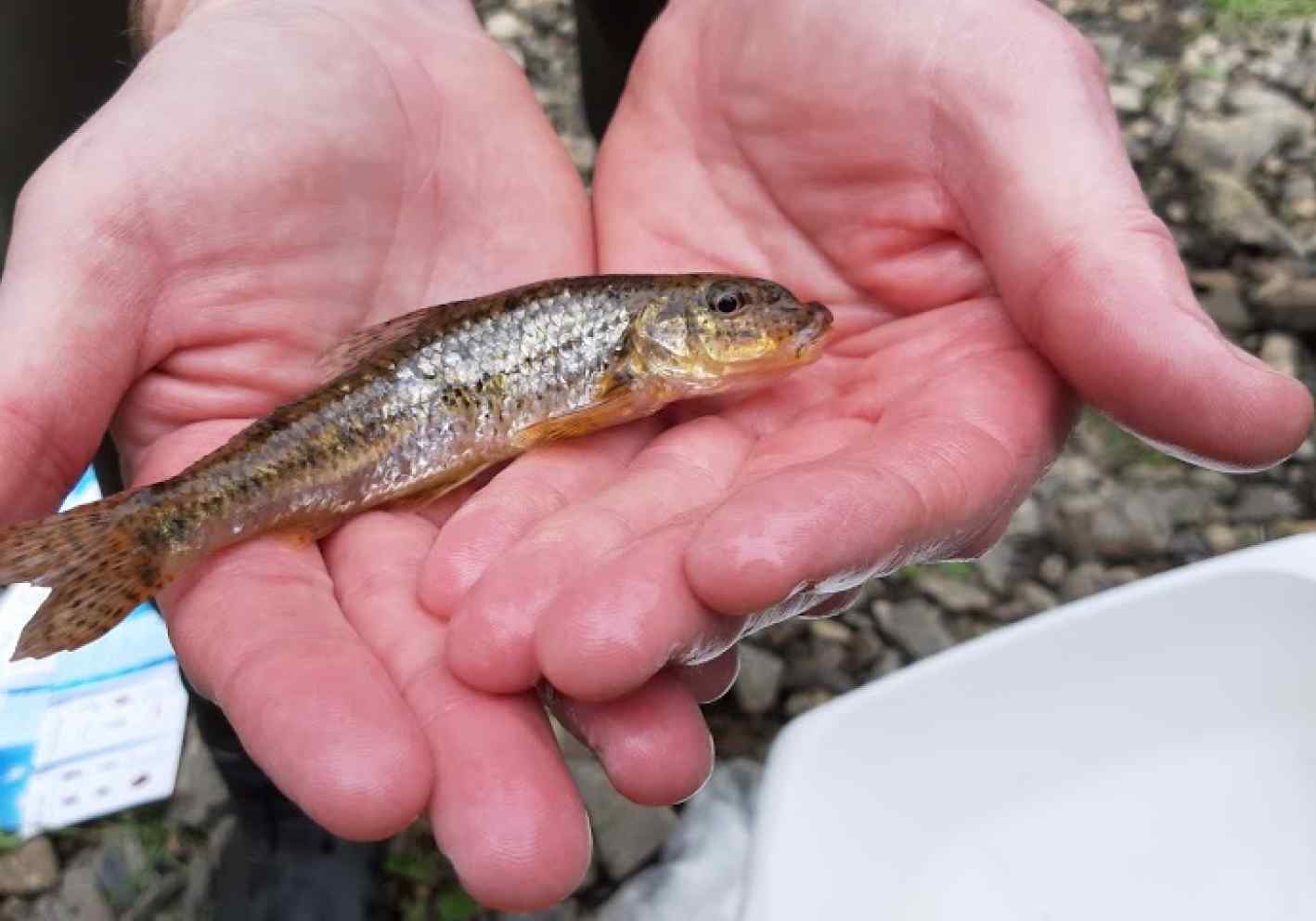 Only the size of a chicken goujon, this Gudgeon (Gobio gobio), a widely unknown species of fish, is in fact quite a large example of its kind. Gudgeon are not frequently recorded in Ireland and are often over looked as part of our freshwater fish communities. This individual of the species was recorded during a river education event held on the Allow River by IRD Duhallow as part of the RaptorLIFE project. Gudgeon forage on sandy and gravelly substrates in both fast and flow moving streams using the barbels on either corner of their mouths to detect their prey. They feed on a variety of invertebrates and have been known to graze on filamentous algae in Ireland. The species is not fished commercially or for sport in Ireland, however in Victorian and Edwardian times it was fashionable to fish for and fry Gudgeon. Indeed the word goujon is derived from the French name for the fish.
A non-native species, Gudgeon is thought to have been introduced to Ireland sometime after the 12th Century however no documentary evidence of exactly when exists. Indeed much of what we know about Gudgeon in Ireland was derived from research conducted on fish caught in the Allow and Blackwater catchments in 1971, however the species has gone largely undetected in the Allow since then. One of a number of species recorded on the day, this specimen of Gudgeon brought unexpected excitement to the event because the distribution of the species in Ireland is so poorly documented. Other species recorded on the day included Atlantic Salmon, Brown Trout, Brook Lamprey and the critically endangered European Eel.
The river education event was held by IRD Duhallow for farmers participating in the RaptorLIFE project. These landowners on the Araglin and Blackwater rivers, voluntarily fenced their sections of the river in order to exclude livestock, with the aim to improve water quality, restore riparian vegetation and stabilise rapidly eroding river banks. Attending farmers had the opportunity to try their hand at casting and angling, but all were absorbed by the wealth of information being given by Andrew Gillespie of IFI on the invertebrates, salmonids and LIFE in the river. It is hoped that through learning and knowledge exchange that farmers will build a greater appreciation for river environments, taking ownership of river protection in their local area, and encouraging others to do likewise. Inland Fisheries Ireland conducted electrofishing and Duhallow Angling Centre of Excellence assisted on the day.
IRD Duhallow RaptorLIFE have fenced off nearly 29km of river in the upper reaches of the Blackwater Special Area for Conservation. Fencing river margins allows the banks to revegetate, thus stabilising areas that are rapidly eroding, further reducing siltation of the river substrate. This in turn will help provide clean gravels for spawning salmonids and brook lamprey, and improve Freshwater Pearl Mussel habitat and that of critical growing stage of its juveniles known as glochidia. This fenced area in itself becomes a new habitat of biodiversity. Many of these farmers were provided with alternative drinking sources for their stock to restrict them from entering the river, this improves the water quality, eliminating the risk of eutrophication and algae on the riverbed, this too being detrimental to the spawning gravels of salmonids, Brook lamprey and the habitat of the Freshwater pearl mussel and its juveniles.