The European otter is an iconic Irish animal species which was much more widespread in former times. This dark furry mammal is most usually found near watercourses, hence the common Irish name for it , an Madra U isce. People fortu nate enough to encounter ot ter, o f ten remark on its intrinsic beauty and playfulness; if the observer is patient enough female otters can sometimes be seen playing with their young as they teach them the essential skills necessary for survival in later life.

Over the last number of decades , the otter along with many other wild species went into decline across Europe . In an effort to conserve threatened wildlife species the European Union established a network of conservation sites known as Special Areas of Con servation. These sites are protected by law and the EU member states are obliged to pr otect the listed species on which each designation is based. T he Munster Blackwater River is listed as one of these site s of species

Provision of Nesting Sites of the European Kingfisher and Dipper 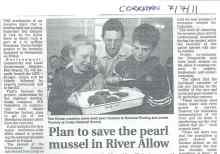 The Corkman - Plan to save the Pearl Mussel in River Allow 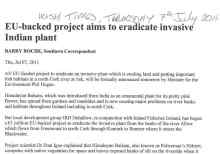 AN EU-funded project to eradicate an invasive plant which is eroding land and putting important fish habitats in a north Cork river at risk, will be formally announced tomorrow by Minister for the Environment Phil Hogan.

Himalayan Balsam, which was introduced from India as an ornamental plant for its pretty pink flower, has spread from gardens and roadsides and is now causing major problems on river banks and habitats throughout Ireland including in north Cork. 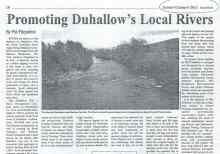