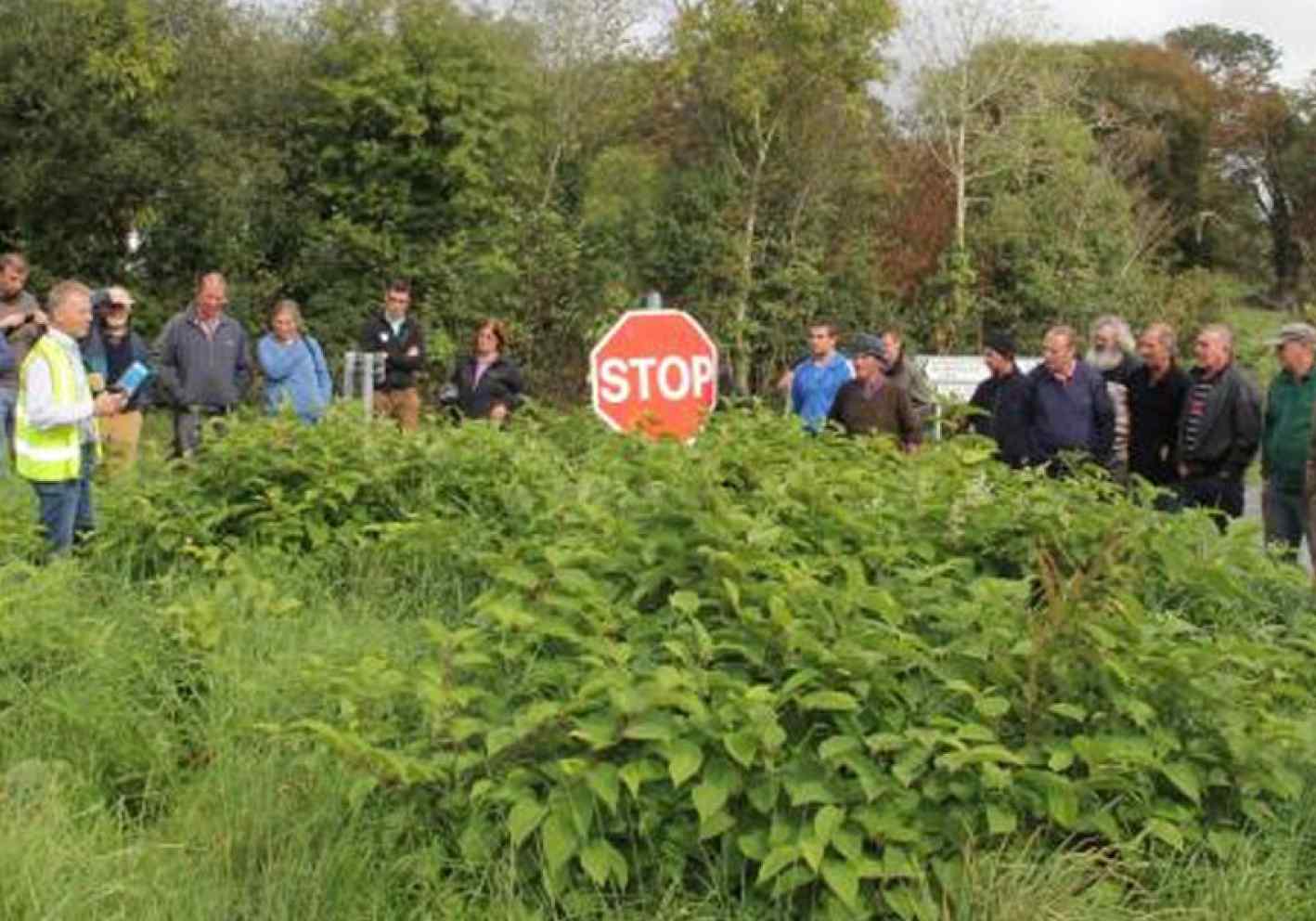 Urgent action is required to remove and prevent the spread of invasive plant species like Japanese Knotweed and Himalayan Balsam before it is too late.  These species are spreading rampantly along roadsides and riverbanks of both Cork City and County, damaging the built and natural environment.

Over 60 people participated in a practical workshop on alien invaders in Newmarket on 1st Oct 2014.  The workshop, jointly organised by the IRD Duhallow LIFE project and the Cork Branch of the Irish Wildlife Trust, was very well-attended. Attracting a wide range of participants, it is clear that the issue of invasive species is no longer a specialist topic but something that affects all walks of life.  Representation at the work shop included local residents, Tidy Towns and community groups, agencies such as the Environmental Protection Agency, National Parks and Wildlife Service, Inland Fisheries Ireland, Cork County Council, Cork City Council, University College Cork, Sligo Institute of Technology, environmental consultancies, engineering consultancies, angling associations, and other community groups such as the Irish Wildlife Trust Cork branch, and the River Feale and River Dodder Biodiversity groups. Interest in the topic was evident not only from the huge turn-out, but also with the fact that many had travelled long distances to be there.

The aim of the day was to demonstrate practical and proven ways to remove invasive plant species and to inspire further action on the ground in County Cork.  The day consisted of a series of presentations followed by a group excursion to a number of local field sites (interspersed with some very welcome tea and cake and sandwich breaks provided by the local IRD Duhallow Food Services).

The workshop began with introductions to the work of IRD Duhallow by Michael Doyle. The activities of the Irish Wildlife Trust and the link with the IRD Duhallow invasive species removal programme was outlined by Aideen Kane. This forms part of the "get involved" initiative that the IRD Duhallow LIFE project signed up to earlier this year.

Tralee Institute of Technology graduate, Kieran Murphy who is the Project Scientist with IRD DuhallowLIFE, kicked off the invasive species presentations with a heartening success story of the DuhallowLIFE's efforts to remove invasive species from the upper River Blackwater catchment. He reported that  "Himalayan Balsam has been removed from vast stretches of the Blackwater River and its tributaries without resorting to chemicals.  The programme is a sustained and labour intensive exercise, involving participants of the various schemes being coordinated by IRD Duhallow and volunteers. Many long hours were undertaken to survey river reaches, drains, fields and roadside verges to identify where the plants were and then develop a programme to manually root it up, and prevent regeneration by seeds."

Dr Isobel Abbott from the Cork Branch of the Irish Wildlife Trust introduced a new project to map the notoriously invasive Japanese Knotweed.  She said "This most stubborn invader is even more difficult to remove than Himalayan Balsam because of its extensive underground rhizomes.  She pointed out that Japanese knotweed should never be cut, mowed, flailed or strimmed as the tiny fragments of stem  and root will propagate into new plants.  The results of which can now be seen along many roadside verges, where small stands of Japanese knotweed plants have now been transformed into large hedges by sometime well meaning trimming but ultimately futile efforts to control the plant. The Cork Knotweed Project aims to educate the public in identification and how to manage the plant using best practice techniques. Therefore a dedicated website has been developed for this purpose and we are calling on people to report their sightings to http://corkknotweed.org".

Cathy Fisher, Biodiversity Officer with Kerry County Council, presented progress and constraints in removing invasive plants including Japanese Knotweed, Giant Rhubarb and Rhododendron in County Kerry.  She outlined with clear illustrations the techniques that were trialled and the effectiveness of a well planned management and maintenance strategy. She also discussed the new law against the spreading of certain invasive plant species. The destructive power of Japanese Knotweed to property was evocatively demonstrated with dramatic photos of it breaking through a new tar macadam path freshly laid at great expense by a local community group.  Cathy outlined cases where Kerry County Council has worked successfully with community groups to kill Japanese Knotweed by injecting their stems with herbicides.

The morning's presentations were concluded by Dr. Fran Igoe of the IRD Duhollow LIFE Project.  Building on the success of the current EU-backed IRD Duhallow LIFE Project, he outlined further plans to remove invasive species along river banks and roadsides in Duhallow and inparticular along the Blackwater River. "The plan is to finally tackle this increasing problem with effective on the ground action. For too long now, the issue has been left for everyone else, with no one taking ownership of really tacking the problem. Like many of our environmental problems we are all part of the problem and so can also be part of the solution. We all use roads for example, so it is in our interest that roads are kept safe for driving and hedges are kept at a safe distance for good visibility of oncoming traffic. But what we need is a way to maintain good road safety but also find practical, cost effective ways to control the spread of these invasive species, especially on smaller country roads, where in time they will cause infrastructural damage and real economic cost. It is imperative that we stop them before they get into water courses" He showed a number of examples where this has occurred, highlighting the ease at which invasive plant species can colonise rivers from roadsides if not managed properly. "Once these invasive plants enter our rivers and streams, then a whole new set of problems arise from, impacts on fishing and wildlife to blocking rivers in floods. Many of these rivers are designated as Natura 2000 sites by the EU and so we are obliged to protect them. The old adage is particularly apt here where "a stitch in time saves nine" but in this case it is more like a stitch in time saves two and a half thousand". Two and a half thousand is the average number of seeds that a single Himalayan Balsam plant can produce in one year. So it doesn't take a mathematician to figure out how fast these plants can reproduce and spread" he said.

The focus of the afternoon was to look at real life situations where invasive species were spreading and bang heads together to come up with practical solutions. For example, a patch of Japanese Knotweed at a dangerous junction was visited, and various ideas were considered. From this discussion, Cork County Council have began to eradicate the plant this week from this area. This is the kind of practical measures and on the ground progress we are hoping to develop said Dr. Igoe. "So we are delighted that Cork Co Council have been so proactive in dealing with the issue here near Newmarket once it was brought to the local engineer's attention".

The group also visited a stand of Himalayan balsam outside Banteer village, where a demonstration of the technique developed by the IRD DuhallowLIFE project, to remove the plant, was given. Dr Igoe emphasised the need for collaboration for these kinds of projects to work and commended the volunteers and the local angling clubs especially for their involvement in a programme which has now treated approximately 30km of river bank, road ditch and drains. He highlighted that the Duhallow LIFE project was participating in the "Get involved programme", which aims to involve local communities in worthwhile community activities, such as environmental management of local areas. The last site visited for the day, was to local landowner, Mr Tony Ahern's farm, outside Kanturk. Tony is a dairy farmer who has been working closely with the LIFE project to improve the environment on his farm. Dr. Igoe outlined how the LIFE project, working with local anglers and Inland Fisheries Ireland, had carried out best practice in river restoration. To do this the project had carried out surveys of the site, to identify where invasive species were present, before doing any river restoration work and then over two consecutive years removed extensive stands of the invasive Himalayan balsam. This meant that proper biosecurity measures were carried out to prevent the spread of the plant to areas outside of the work area. This is a critical issue, especially where plant hire equipment is involved, as the tracks, trailers, wheels and other equipment can inadvertently spread invasive species to new sites if not cleaned off properly. Dr. Igoe stated "it's better to remove the invasive species first from a site, and this then removes the risk of inadvertent spread of these nuisance species to other sites".It was clear from the participation and interaction during the workshop that there are many people from a wide cross-section of the community, with a common goal of tackling invasive plant species.  The workshop facilitated the exchange of ideas and practical approaches, urging action earlier rather than later, to restore our riverbanks and roadside hedgerows to a thriving natural balance.  If we all get involved it can be done!