Article in the Kerryman 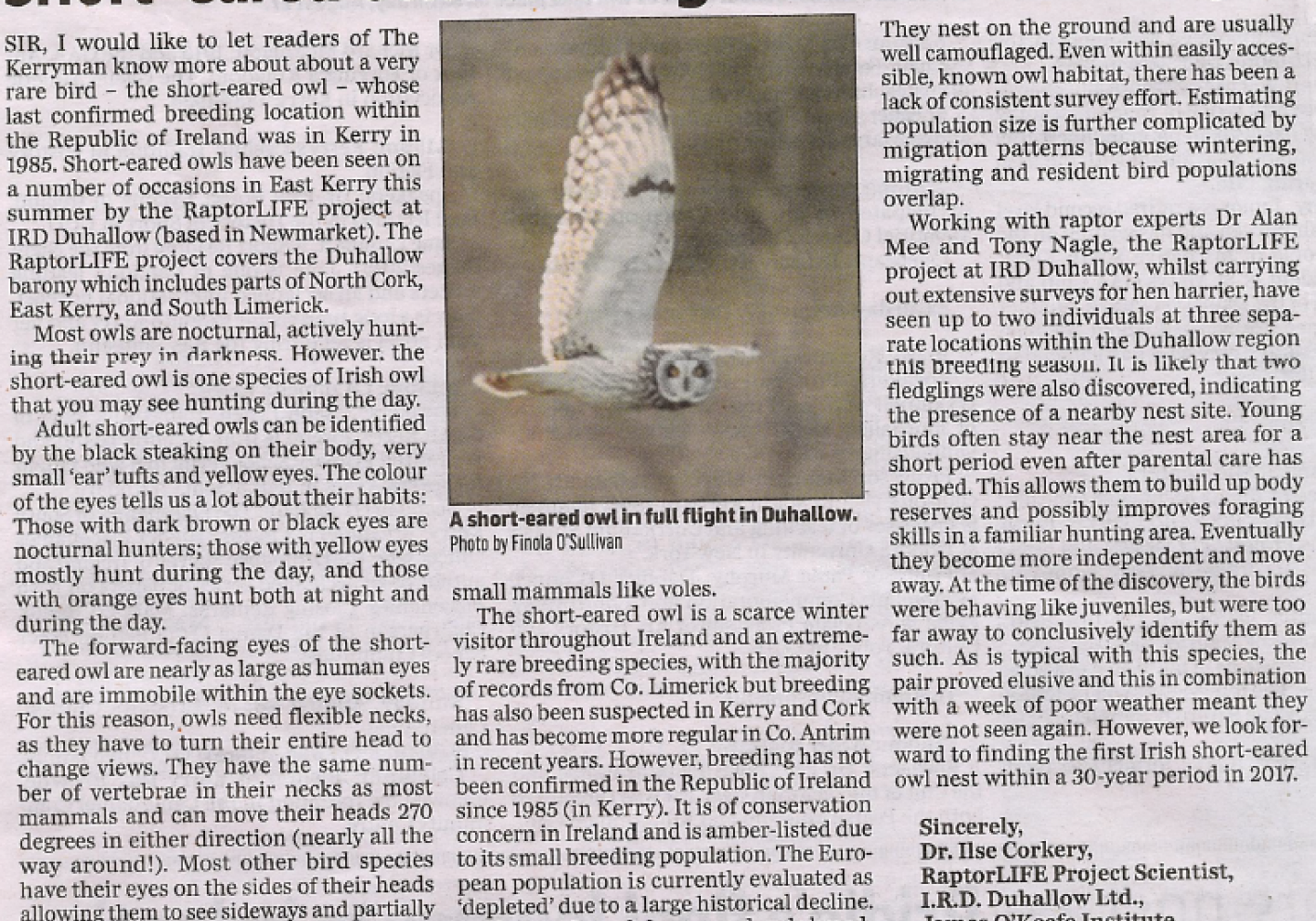 SIR, I would like to let readers of The Kerryman know more about a very rare bird – the short-eared owl – whose last confirmed breeding location within the Republic of Ireland was in Kerry in 1985. Short-eared owls have been seen on a number of occasions in East Kerry this summer by the RaptorLIFE project at IRD Duhallow (based in Newmarket). The RaptorLIFE project covers the Duahllow baronry which includes parts of North Cork, East Kerry and South Limerick.

Most owls are nocturnal, actively hunting their prey in darkness. However, the short-eared owl is one species of Irish owl that you may see hunting during the day.

Adult short-eared owls can be identified by the black steaking on their body, very small "ear" tufts and yellow eyes. The colour of the eyes tells us a lot about their habits: Those with dark brown or black eyes are nocturnal hunters; those with yellow eyes mostly hunt during the day, and those with orange eyes hunt both at night and during the day. The forward-facing eyes of the short-eared owl are nearly as large as human eyes and are immobile within the eye sockets. For this reason, owls need flexible necks, as they have to turn their entire head to change views. They have the same number of vertebrae in their necks as most mammals and can move their heads 270 degrees in either direction (nearly all the way around!). Most other bird species have their eyes on the sides of their heads allowing them to see sideways and partially backwards. Owls, on the other hand, have both eyes in the front which enhances their depth perception, perfect for feeding on small mammals like voles.

The short-eared owl is a scarce winter visitor throughout Ireland and an extremely rare breeding species, with the majority of records from Co. Limerick but breeding has also been suspected in counties Kerry and Cork and has become more regular in Co. Antrim in recent years. However, breeding has not been confirmed in the Republic of Ireland since 1985 (in Co. Kerry). It is of conservation concern in Ireland and is amber-listed due to its small breeding population. The European population is currently evaluated as “depleted” due to a large historical decline.
The number of short-eared owls breeding within Ireland is difficult to assess because they favour remote upland areas. They nest on the ground and are usually well camouflaged. Even within easily accessible, known owl habitat, there has been a lack of consistent survey effort. Estimating population size is further complicated by migration patterns because wintering, migrating and resident bird populations overlap.

Working with raptor experts Dr Alan Mee and Tony Nagle, the RaptorLIFE project at IRD Duhallow whilst carrying out extensive surveys for hen harrier, have seen up to two individuals at 3 separate locations within the Duhallow region this breeding season. It is likely that two fledglings were also discovered, indicating the presence of a nearby nest site. Young birds often stay near the nest area for a short period even after parental care has stopped. This allows them to build up body reserves and possibly improves foraging skills in a familiar hunting area. Eventually they become more independent and move away. At the time of the discovery, the birds were behaving like juveniles, but were too far away to conclusively identify them as such. As is typical with this species, the pair proved elusive and this in combination with a week of poor weather meant they were not seen again. However, we look forward to finding the first Irish short-eared owl nest within a 30-year period in 2017!