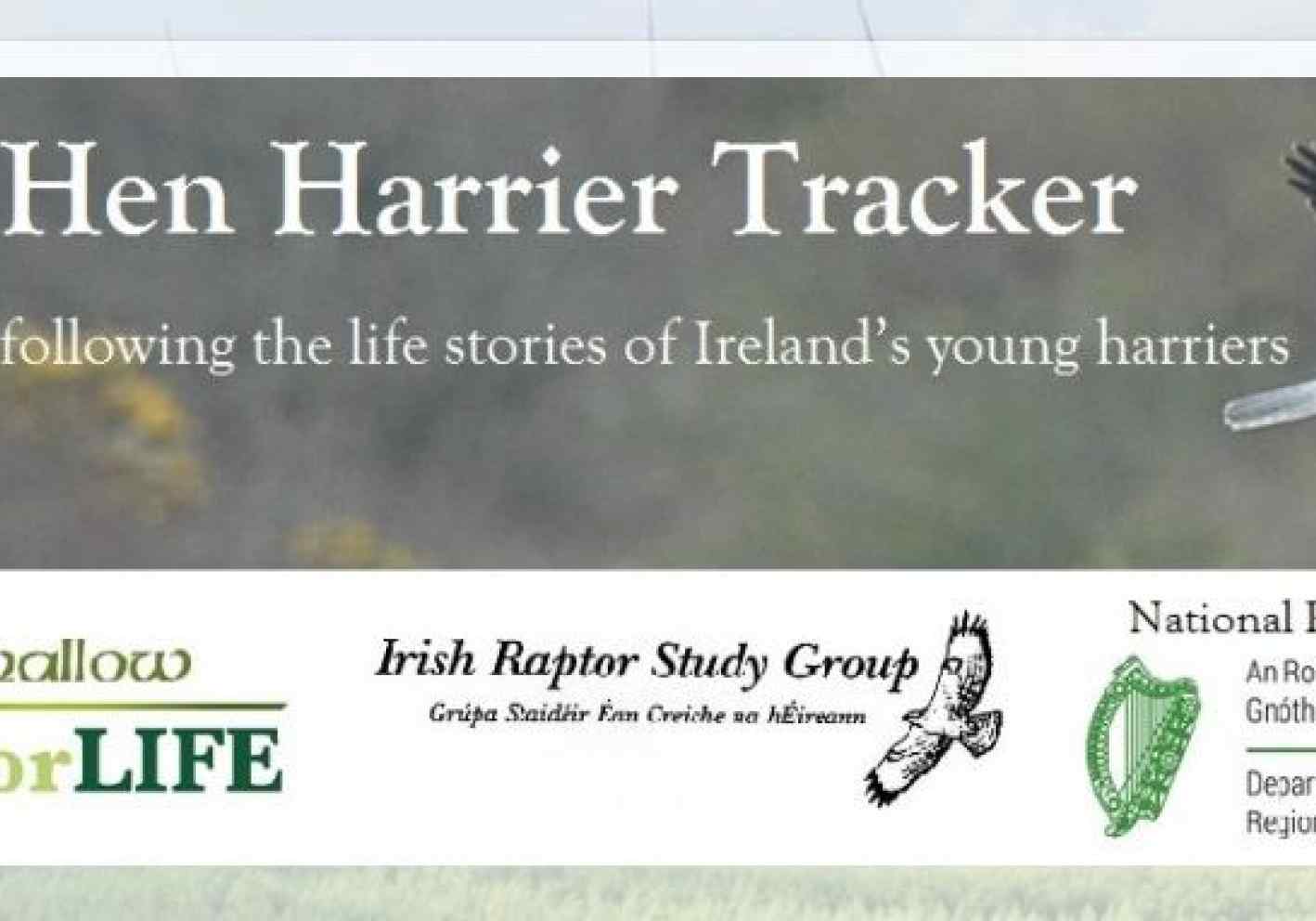 A total of 39 sites were monitored across all regions as part of the satellite tagging projects with the highest fledging success rates in the Ballyhouras and the lowest in the Slieve Blooms. A high failure rate in the Blooms, with three pairs failing early in the season and predation proven or suspected in another four cases, contrasted with good nest success rates estimated for the Ballyhouras and Duhallow regions.

Ten harrier chicks were tagged at nests spread across the Slieve Blooms (2), Knockmealdowns (1), Ballyhouras (4), Boggeraghs (1) and Mullaghareirks (2). These included 5 males and 5 females from broods of 2-4 chicks. The tagged chicks were estimated to range from 24-35 days old. Chicks were sexed based on tarsus width, weight and/or iris colour.

Six of the 10 satellite tagged juveniles dispersed away from the natal site . Fledged satellite tagged juveniles began to explore beyond the local nest site (>1km) from 18-35 days after tagging and dispersed away from their natal areas 21-40 days after tagging. Most juveniles (i.e. four of the six) dispersed, at least initially, in a northerly direction while two dispersed is a southerly or easterly direction. The Boggeraghs juvenile (160250 female, green track) was somewhat exceptional in leaving her natal site in mid-July, 18-21 days after tagging. This equates to an approximate age of 51-54 days old. This was at least partly explained by the fact that this was the most advanced nest, over three weeks earlier than the last tagged bird (160251). In comparison, other juveniles dispersed away from natal sites in early to mid-August: Slieve Blooms (159138 female, 52-59 days, red track; 159142 male, 62-65 old, blue), Knockmealdowns (159143 male, 62-66 days, yellow), Ballyhouras (160250 female, 57-59 days, purple) and Mullaghareirks (160251 female, 58-63 days, black). SUMMARY OF POST-FLEDGING SURVIVORSHIP Of the 10 tagged harriers four apparently died within two weeks of fledging. Two were recovered 200-250m from nests having apparently died 6-14 days after fledging. Another (160248) died some 19 days post-fledging although this bird had dispersed early away from its natal site. Another four birds survived 54-72 days post-fledging but died within a narrow window (18-22 September) in different locations. Of these four, 160251 may have died due to a wind-turbine strike. However, it should be noted that this bird had at least background, and possibly sub-lethal, levels of brodifacoum, a 2nd generation rodenticide. The other three harriers died over a 1-2 day period. Met Eireann notes that the September rainfall values were above the long-term average with exception of a few isolated stations away from the locations of the three harriers. Thus, these birds may have succumbed to a period of prolonged rainfall in combination with poor body condition as a result of difficulties in finding enough food. The final bird (159142) was recovered dead in late October, but the post-mortem was inconclusive.

WHAT WE HAVE LEARNED SO FAR

· Almost 500 tracking days from 10 harriers have been collected resulting in the acquisition of over 2,500 fixes providing information on the activity of the subject birds

· The majority of these fixes (almost 1,500) are of a high enough quality that can be used to help identify dispersal patterns as well as important post-breeding roosting areas

While the loss of all juveniles before their first winter reiterates the high mortality rates of young hen harriers, such mortality if extrapolated to the wider population would be clearly unsustainable. However, although the sample size of tagged birds remains small, and the high mortality experienced here may have been in part due to hatching order effects (lower survivorship of last hatched chicks), young harriers clearly face many threats and pressures. We hope to be able to be able to understand these better through satellite tagging.