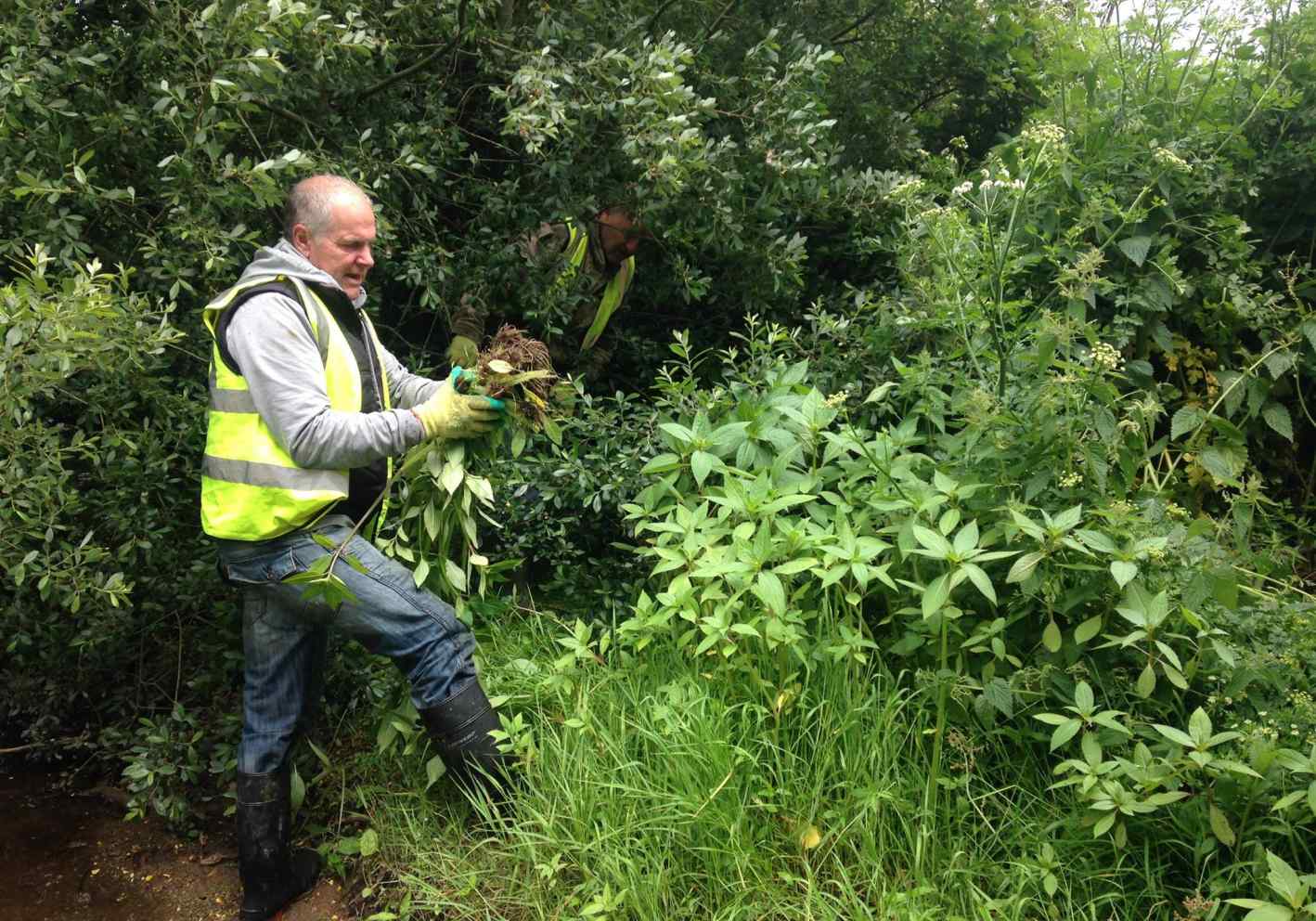 Himalayan balsam (Impatiens glandulifera) is one of these invasive terrestrial plant species. Originating in the Himalayas, it was planted as an ornamental flower in many gardens around Ireland. Indeed, when it was owned by the Aldworth family, the grounds of the James O’Keeffe Institute in Newmarket were once planted with Himalayan balsam. Since its introduction in 1839, it has spread throughout the island of Ireland.

Himalayan balsam is the tallest annual plant in Ireland (completes its life cycle in one year), and due to its rapid growth, it shades out most of our native species. This in turn reduces the food sources and nesting habitat for insect, bird and mammal species. The species is frequently found in areas of damp soil such as along the banks of watercourses, where it often forms continuous stands. In certain stretches of the river it can be the dominant plant along hundreds of metres of river bank. The plants die back in autumn, leaving the river banks devoid of vegetation and prone to excessive levels of erosion. This erosion significantly increases the level of silt getting into the river. This silt is deposited on the riverbed, which smothers fish spawning beds and habitat for species such as the Pearl mussel, Brook lamprey and Atlantic Salmon.

The riverbank is part of the riparian zone, which is very important for both land and aquatic life. A variety of mammals, like the European Otter, use the river to fish for food and construct holts in the scrub in or adjacent to the riparian zone. Trees and exposed river banks in this zone provide nesting habitat for birds like the Kingfisher, Dipper and Sand martin. Many insect species, such as the mayfly, have a life cycle that is part aquatic and part terrestrial, and are only found in the riparian zone. Insects in turn are food for other species, both those found in and out of the water, for example the diet of the Atlantic salmon is largely composed of insects from the terrestrial environment.

The RaptorLIFE project is providing a coordinated response to controlling Himalayan balsam along 126 kilometres of river, with the long term aim of eradicating it from the Upper Blackwater Catchment. As part of our conservation work we are committed to removing invasive plants to improve river life, and to conserve our natural flora and fauna. Thanks to the dedicated work from our Rural Social Scheme and Tús participants, enthusiastic volunteers, and diligent local anglers, Himalayan balsam has already been tackled along 35km of riverbank within the Duhallow region. While the plant has nearly been eradicated from the Allow catchment, annual monitoring of the Allow riverbanks is ongoing as seeds from the flower are still viable after two years in the soil. Buoyed by our success, we are now committed to eradicating Himalayan balsam from the upper reaches of the Blackwater River. This work is now in full swing, and will continue over the remaining summer months.

The RaptorLIFE team appeals to all landowners to contact us on 029 60633 if they have either Himalayan Balsam or Knotweed on their property. These invasive plants can devaluate properties, cause bank erosion, and create problems for the environment.