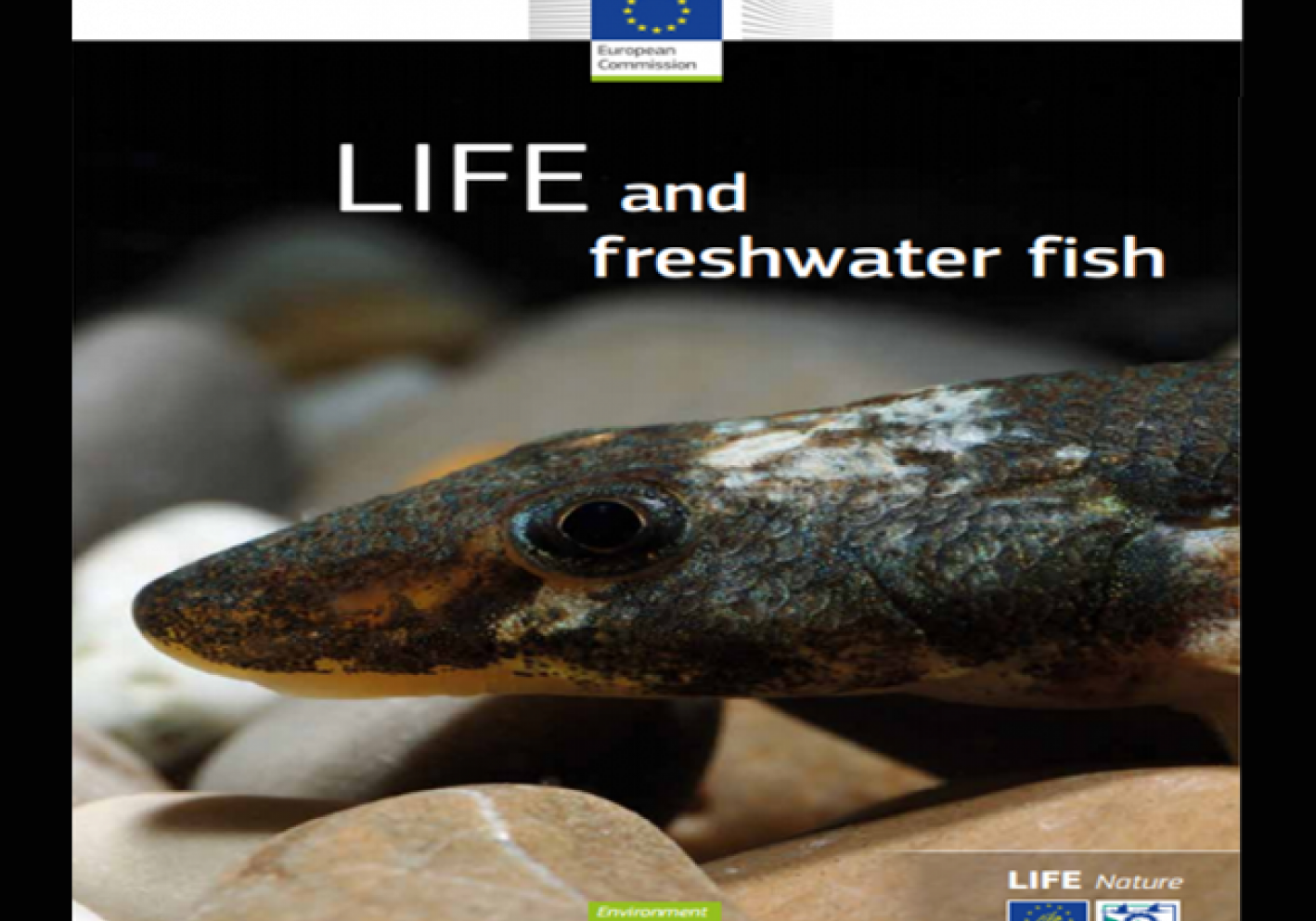 A new document “LIFE and Freshwater Fish” has just been published by the European Commission. The document provides an important update on Freshwater Fish communities and outlines Freshwater Fish conservation projects funded under the EU LIFE programme to date. Did you know that “Freshwater fish are one of the most diverse groups of vertebrate species in Europe, and they represent around one quarter of all vertebrates worldwide.”

The report highlights the fact that Freshwater Fish are under threat across Europe due to a range of unsustainable human activities. At present, 85 of the 202 Freshwater Fish species in Europe are considered as ‘threatened’, according to the latest IUCN Red List assessment. A total of 77 Freshwater Fish species are listed in Annexes II, IV and V of the Habitats Directive. This assessment also shows that there are 60 Freshwater Fish species threatened at the EU-27 level which are not covered by the relevant annexes of the Habitats Directive. Within Europe, the areas of highest fish species richness are within the lower parts of the large EU rivers flowing to the Black and Baltic seas, such as Danube and Vistula. However important fish communities also occur within central and Northern Europe some of which are of commercial importance (e.g., Atlantic salmon Salmo salar). In Ireland the Irish pollan Coregonus pollan (although only listed under Annex V of the EU Directive), is one of the world’s most unique Freshwater Fish species. Brown trout Salmo trutta and Arctic char Salvelinus alpinus, although not listed species under the EU Habitats Directive, are important as they have formed or are in the process of forming subspecies or even species (e.g.. Gillaroo in Lough Melvin). The report highlights pressures on Europe’s freshwater fish communities such as the loss of riverbed substrate, water extraction, eutrophication, river regulation and stream fragmentation.

A number of LIFE funded projects with actions aimed at Freshwater Fish conservation are show cased in the report. The DuhallowLIFE Project, a partnership between IRD Duhallow and Inland Fisheries Ireland is one of these. Actions highlighted include our project innovation to fence off of river banks in areas vulnerable to flooding. The report also discusses our extensive Himalayan balsam removal programme. The instream conservation works for Atlantic salmon of our sister project, MulkearLIFE were also featured.

Extract from page 20 of the LIFE and Freshwater Fish: ‘Blackwater restoration Atlantic salmon was also among a number of target species that are benefiting from restoration measures carried out on the River Allow in Ireland under the Blackwater Samok project (LIFE09 NAT/ IE/000220). The river’s catchment area lies in the Upper Blackwater River SAC, a site that in recent years has suffered from agricultural practices through nutrient enrichment and pollution. Modifications to the river have also led to its degradation whilst, similar to the MulkearLIFE project, the spread of invasive plants (in particular Himalayan balsam) and overgrown bank vegetation also present a threat to the spawning beds and food sources of the fish. According to Fran Igoe, the project leader, the project is on track to reach its targets. “The project initially intended to remove the invasive plant Himalayan balsam from 4.6 km without using chemicals (i.e. manually). We have now addressed 35.7 km of riverbanks and drains, possibly making it the largest continuous non-chemical Himalayan balsam control project of its kind in Europe! Results are very good with 100% eradication in most places.” The project has developed an innovative transferrable method for fencing off livestock in areas vulnerable to flooding. “The fence can withstand major flood events through a simple technique that the farmers can maintain easily. Similarly we have developed a novel system for trapping silt in farm drains before it enters the Special Area of Conservation,” says Dr Igoe. Furthermore, the project is demonstrating how the problem of river bank erosion can be addressed to aid salmon conservation. Monitoring has already shown that such river restoration has resulted in a fourfold increase in the density of juvenile salmon at one site.’

This project is part funded by the LIFE financial instrument of the European Commission.